12-10-20 MSM is funny like that…they do these hit pieces to shut you down. I guess they can’t see the irony here. They accuse a film of being “white nationalist” that is being promoted by a Border Patrol Rep who happens to be African American. If you read the articles, you will notice they NEVER point out where in the film the so-called “white nationalists” appear. 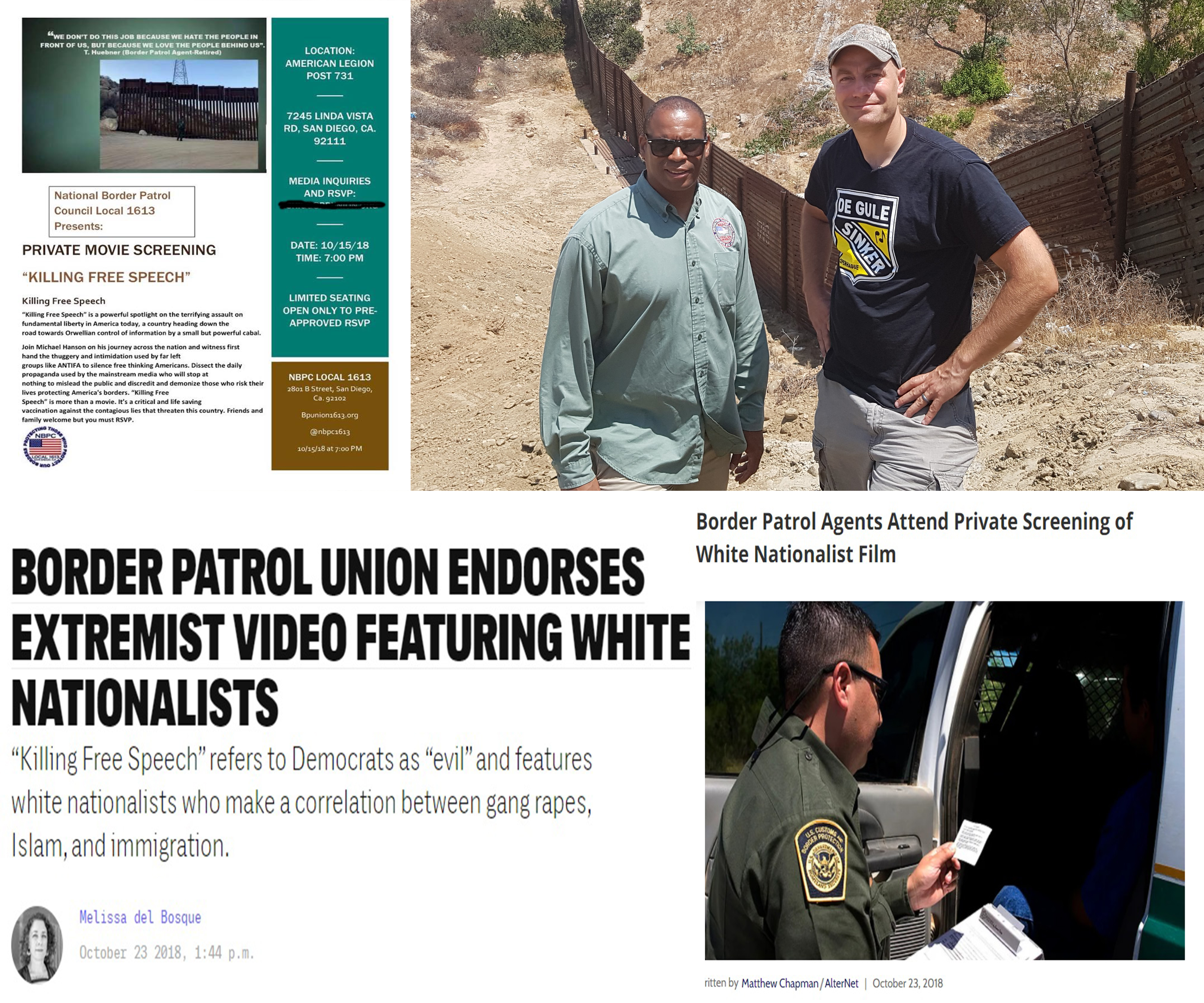 11-24-20 Once again Big Tech censors my work. Border Patrol Union endorsed this film and yet Amazon bans it 5 days before the election.

07-30-20 Amazon has doubled down and banned Part 2 due to “offensive content” and the Democrats refused a screening on Capitol Hill. 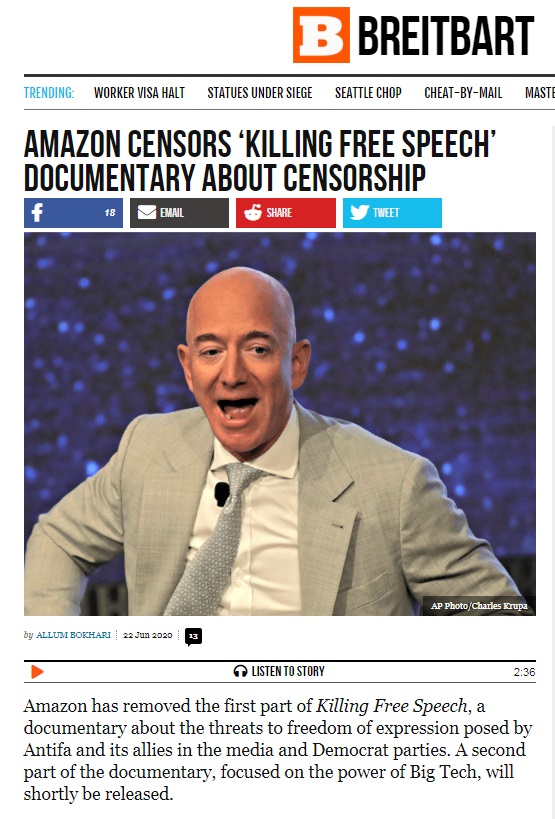 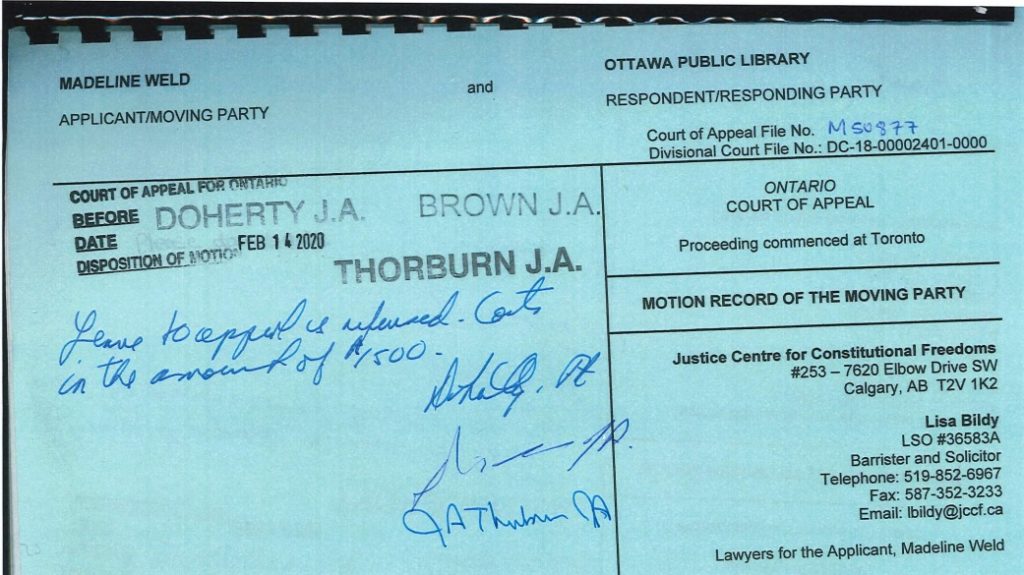 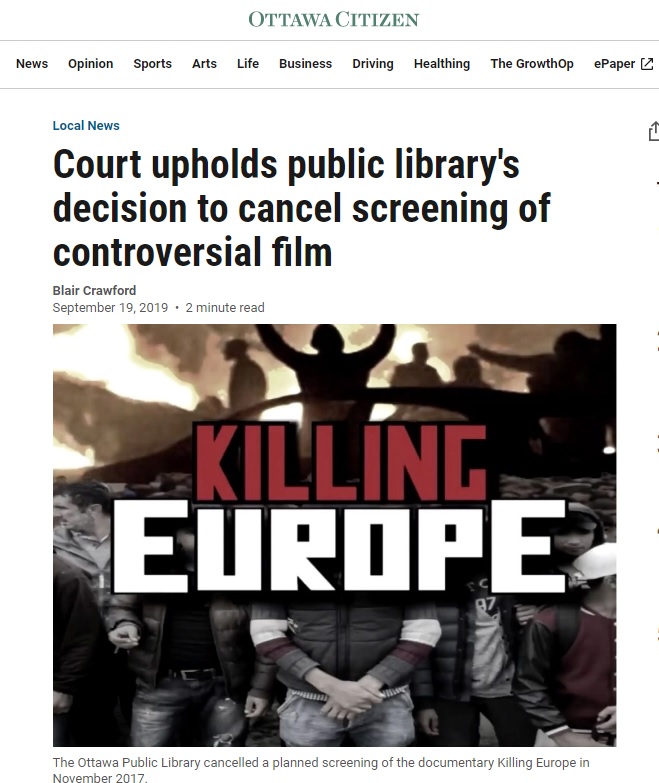 10-26-19 Activist from Act for Canada has mailed over 500 copies of Killing Canada to every member of the Canadian Parliament and media outlets.

10-05-19 The Ezra Levant Show, lawyer John Carpay joins Ezra Levant to talk about his legal battle against a public library in Ottawa halting the screening of the documentary Killing Europe.

09-20-19 Just received this screenshot from Swedish journalist Ingrid Carlqvist. Apparently any articles that mention Killing Europe are now being demonetized by adsense. The first step in censorship is to hit the independent journalists on their livelihood. One can only fear that this is the first step in completely censoring any mentioning of Killing Europe or any other talk of the effects of mass immigration. 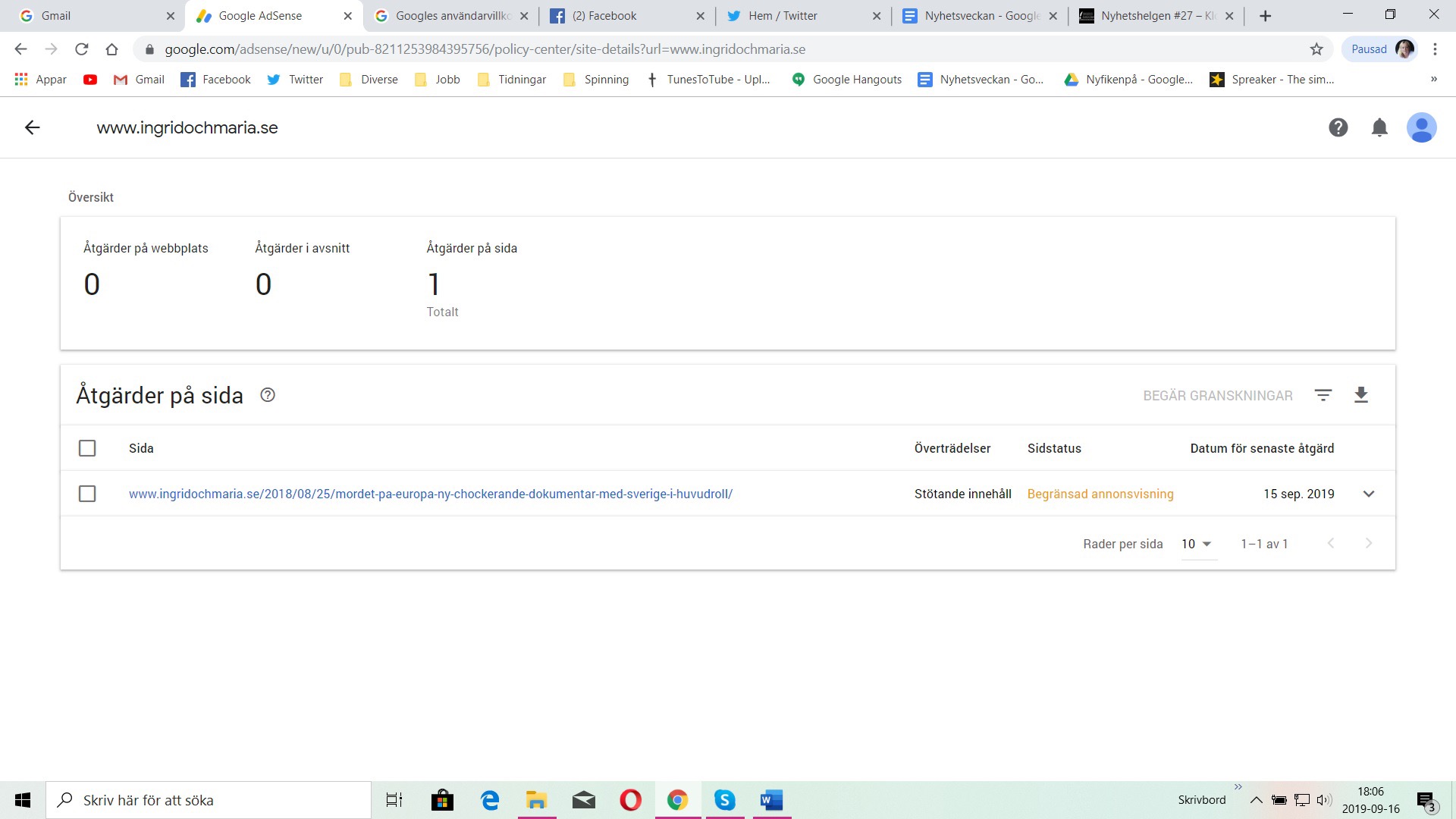 08-08-19 Empire Strikes back…how the left is going into censorship mode of my movies. More from The Glazov Gang and Breitbart News Network. 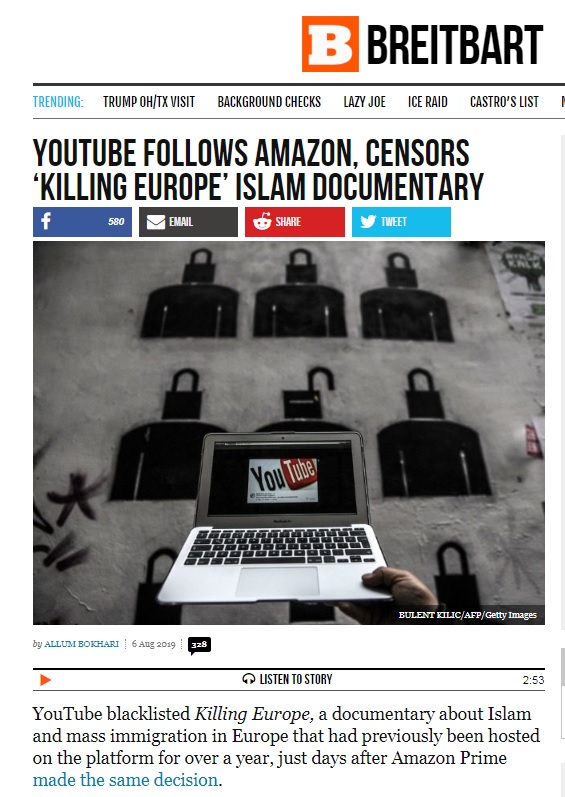 07-25-19 Big tech decided it was now time to take me down. Article on Breitbart News Network 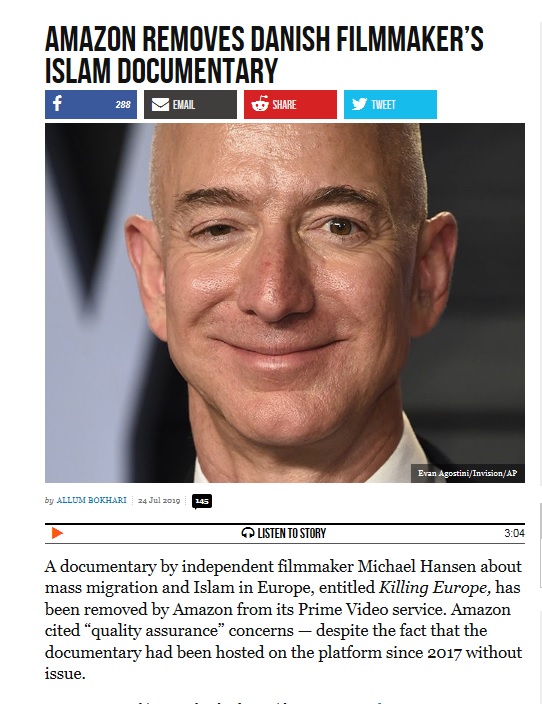 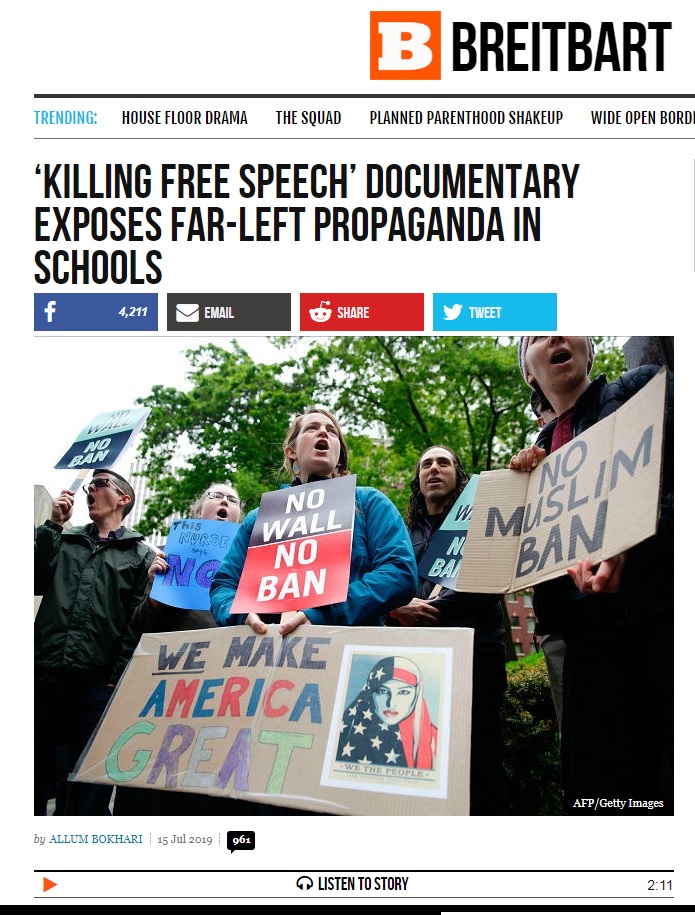 05-28-19 We just started shooting for Killing Free Speech Part II. A big thanks to Allum Bokhari from Breitbart News Network for the interview and help. 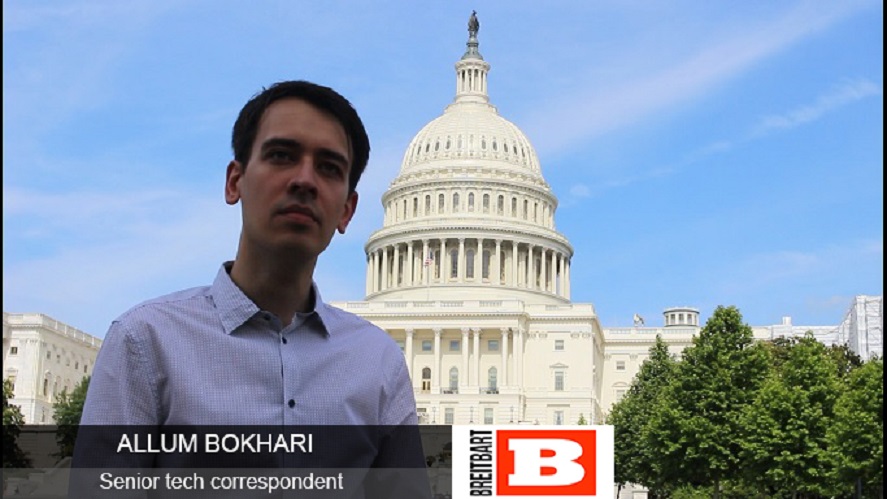 For the folks in Missouri, here is a clip from the movie featuring CAIR.

02-07-19 massive DDos attack on server hosting Killing Canada. This was the second server to host the movie. We have made it avaible on vimeo in the hopes that the movie will stay up. More in this on Vlad Tepes: 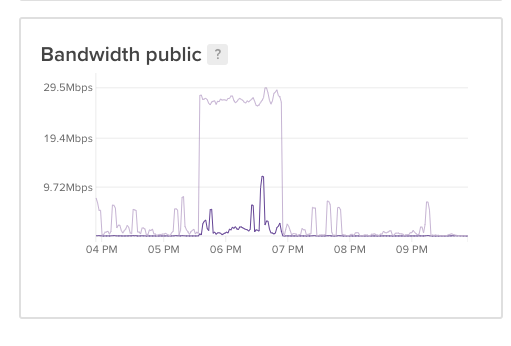 02-03-19 A story from the Tomi Lahren show when she was on the Blaze. We can neither confirm or deny we were behind this film.

01-21-19 Article on the Gateway Pundit about the release of Killing Free Speech.

Private Movie Screening of “Killing Free Speech.” RSVP ASAP to make sure you have a seat. pic.twitter.com/R9DHUbcMv3 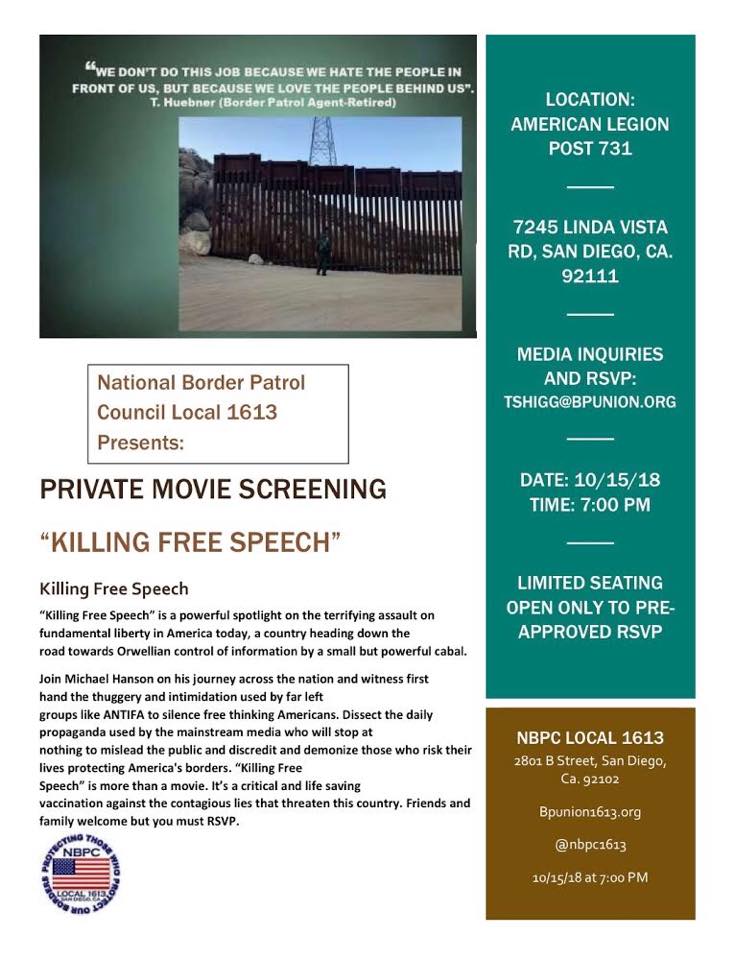 09-19-18 The film “Killing Europe” has been nominated for an award by the London based organisation Passion for Freedom:

article from The Ottawa Citizen

3-9-18 Krudttoenden, the venue attacked by Islamist in 2015, refuses to host screening of “Killing Europe” in Copenhagen as the film deals with “issues too risky to talk about”. I guess I don’t blame them on a personal level. However, this shows the terrorist have been successful in scaring some into submission in Denmark.

NOTE: Article is in danish
http://www.uriasposten.net/archives/91167

FROM BIZPAC REVIEW: How “Killing Europe” proves that President Trump is right about Europe:

Articles on the Antifa induced cancellation of the Ottawa/Canada Screening:

ACT for Canada rep. Alexandra Belaire is interviewed on Ottawa formerly conservative talk radio AM station, CFRA. This is pertaining to the Ottawa Public Library now deciding what movies people are able to see or not based on unspecified criteria: